Thanks to some help from my beady friends, my first foray into materials packs for my Baroque Tape Measure Surround Tutorial has gone well.  So I’ve had a root around and have put together some more.  As is inevitable with beadwork, I have had to order some beads, so not all of them are quite ready to go, but I thought I’d give you an idea of what is coming as well as the two more that are ready and listed, in case you see something you fancy.

And coming up within the next week or so:

And finally, I hope to get a new tutorial up within the next couple of days – something a little simpler featuring a bit of oink!  Here’s a teaser…….

Before Christmas I beaded another project from Beadwork Evolution – ‘Stars We Are’ earrings. I wore them a couple of times (sadly dangly earrings don’t get worn much when there is a toddler in the house), but it was only when I laid them out to photograph them at the weekend that I realised I’d messed up! 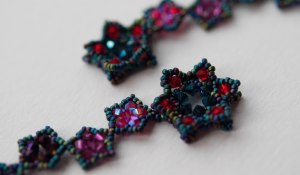 Have you spotted it? To give you a clue it’s my old problem with hexagons versus pentagons…….

So I am pleased to report that this design can be adapted to form a five sided star at the base rather than six. Ideally though one should adapt both earrings, not just one!

Really lovely, nice to make and fabulous to wear.  It took under an hour per earring, probably less for a second go, so I’m definitely going to make again in some other colours.  I’ve got some lovely opaque bicones which might make a less blingy version for the daytime as well. 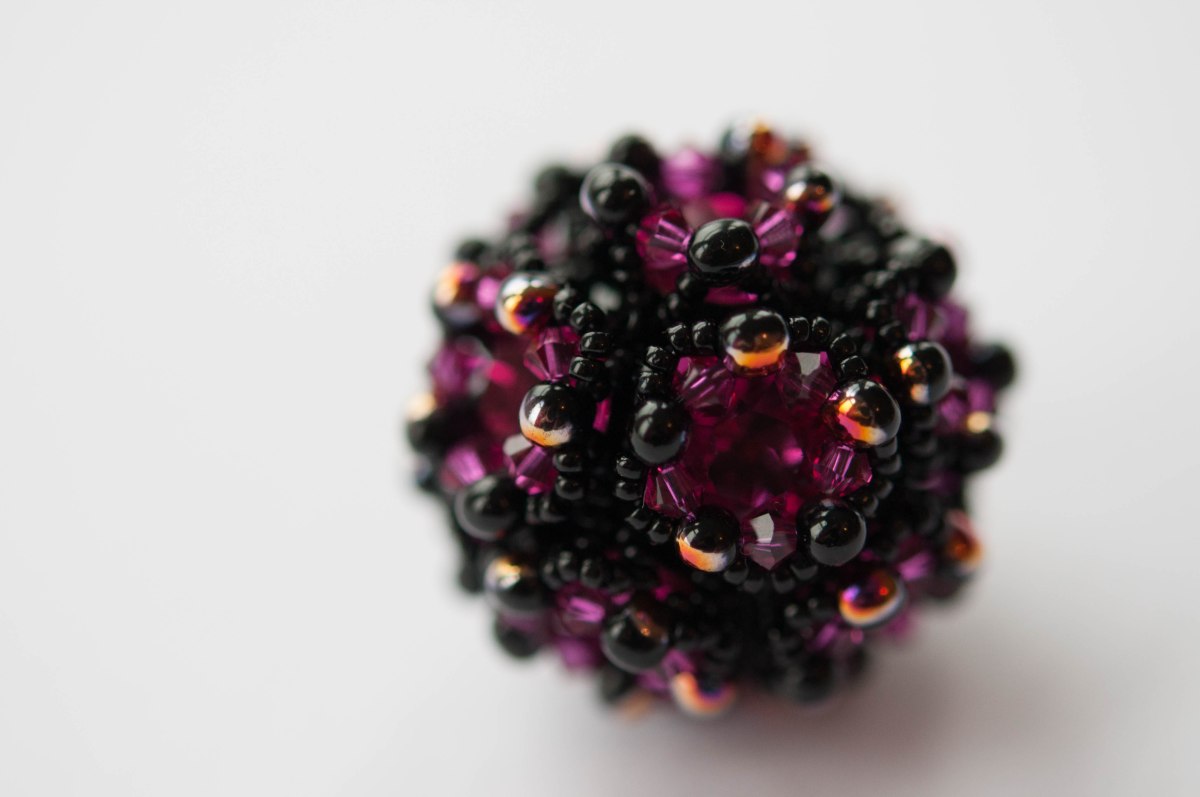 When I started this blog I made a few rules for myself.  One of them was to try to use photos taken on my phone, so that I was just capturing the work I’d done without having to set up for ‘proper’ photography.  In my shops  all the photos have been taken ‘properly’ as I think it’s important for customers to get the best possible reproduction of what they are buying, and I want to be able to show levels of detail only possible with a macro lens.  When I take the ‘proper’ photos I use our digital SLR, macro lens and big sheets of white or black mounting board propped up in our front room window – the translucent window film which stops the neighbours seeing the mess inside gives a lovely diffuse natural light.  For the blog I want more spontaneity, and definitely don’t want to wait weeks for that elusive couple of hours with no little people.  When I take photos for the blog or Facebook it’s usually with my iPhone, against whatever plain background I can find and with the closest to natural light I can get – I’m after speed rather than fabulous quality, but so far I’ve been really impressed with the photos I’ve taken.  Last year I particularly enjoyed being able to shoot my Fortuneteller on the lovely slate tiles in our back garden,  with nasturtiums behind. However, in the depths of winter, I’ve really struggled – so although I finished my Bubble Ball before the New Year, I’ve only now had the time to get the big camera out and take some pictures for you. 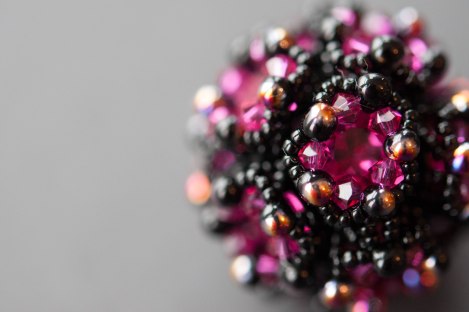 The Bubble is another piece from Sabine Lippert’s new book ‘Beadwork Evolution’ and it was the piece I wanted to make the most when the book arrived.  I only had the twelve chatons required in a couple of colours, and although I thought I had lots of drops, only one set matched, so I’ve ended up with a combination which makes the finished ball look quite different to Sabine’s.  Black, though versatile isn’t a favourite colour for beading, and it is tricky to photograph.  That said, I still love it, and the drops I used are just stunning and I think they really make the piece even though it’s not as bubbly as Sabine’s. 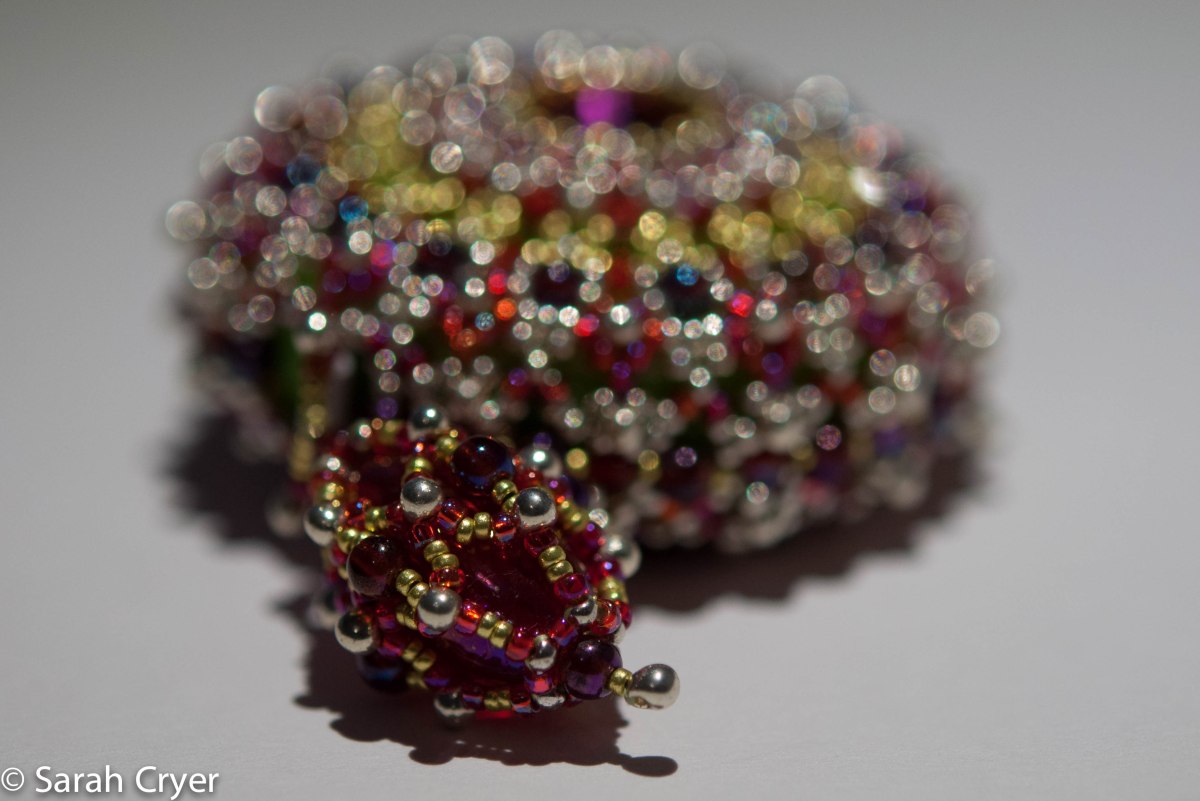 Just a quick post to let you all know that I’ve put together some materials packs for the Baroque Tape Measure Surround.  Two colourways which I’ve beaded up previously, including the original Bronze & Fuchsia, plus two completely new colourways never yet made, so they will be completely unique.  They are available here on Folksy (Bronze & Fuchsia; Bronze & Capri Blue; Silver, Red & Turquoise, Gold & Scarlet) and here on Etsy.  For choice I’d love it if you used Folksy as they are very nice and I’m really, really upset with Etsy about their behaviour to sellers around the whole EU VAT thing…… more about that another day.

Now I’ve got a good stock of tape measures and those elusive 2.8mm drops I’m more than happy to put together custom materials packs for you – just drop me a message/comment with a colourway request and I’ll have a beady play. 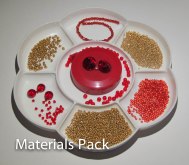 Although these are listed for UK sales only, I’m happy to discuss and set up overseas postage – be aware that now I’m back at work I can’t get to the Post Office as easily for overseas posting (for UK posting I’ve carefully planned these as letter post size to avoid that trip), but if we have a chat I can let you know what to expect.