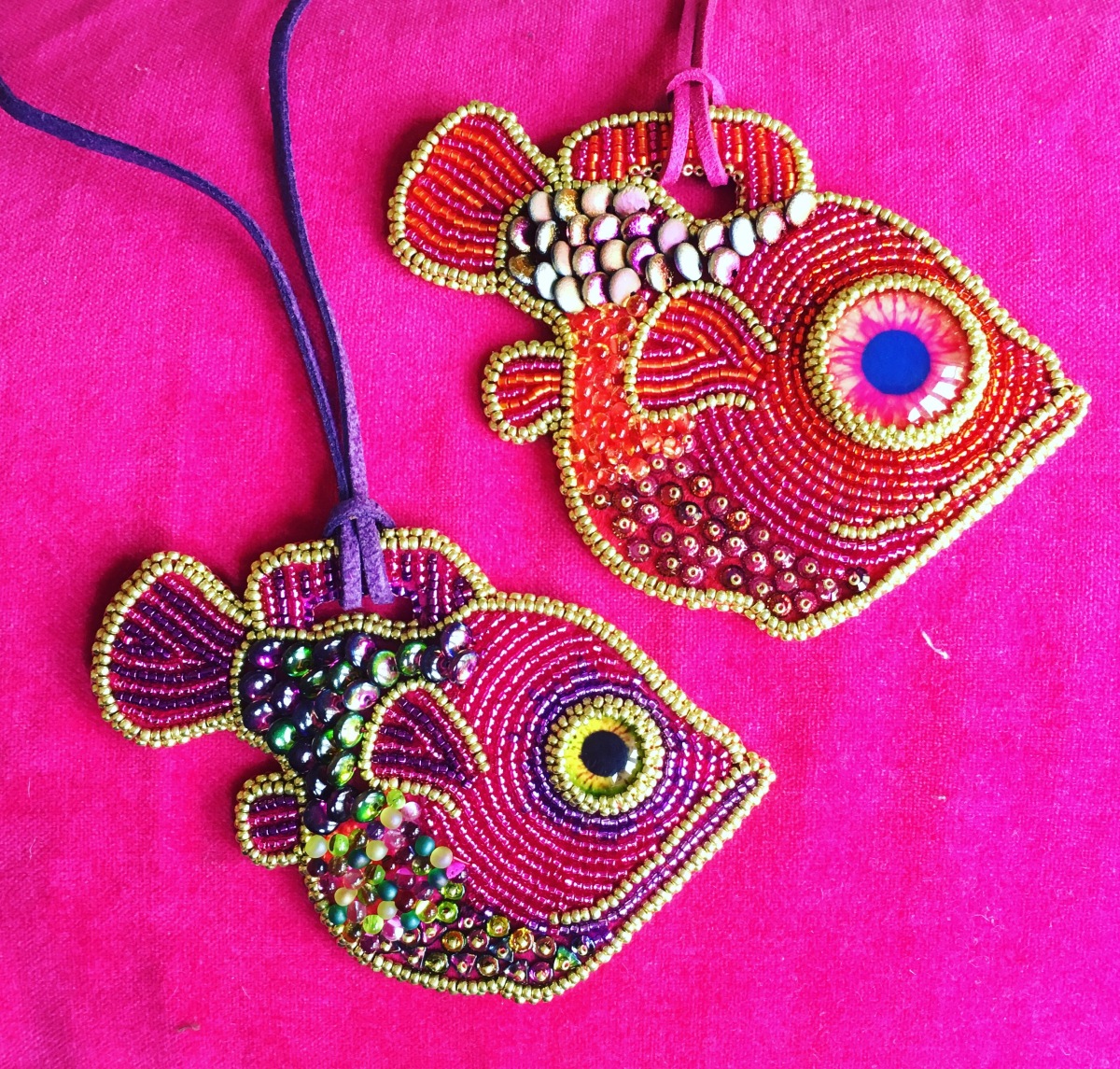 Having been reminded of her gorgeous work in the recent Stitch and Craft  brochure, I googled Kinga Nichols to see if she offers kits or tutorials for those of us unable to get to classes.  She does, but her Etsy shop is a bit empty as she’s just been away – this is probably just as well given that I have far too many beads already, the pound is low, and postage from the States is horribly expensive.  However, further googling turned up her new video tutorial for Interweave.  I’ve used free video tutorials in the past to help with things like knitting and sewing, but never for beading, and to be honest, never paid for.  But it’s something I’d maybe like to try doing myself one day, and I’d just bought a fantastic eye cabochon from WingSmith and some red bead foundation from Jencel at the Big Bead Show, so it felt like the beady universe was saying ‘go on go on’,  so I splashed out the rather steep $19.99 and had a go.

We made a fish.  She is rather lovely, and ugly at the same time, and I really enjoyed making her.  I have learnt about glues, fabrics etc, drawn and cut out my base (the tutorial claims to be focussed on working with pre-cut foundation, but to be fair other than the fact that we are using one, it’s not about that, it’s really about making a lovely beaded fish).  I’ve at last sorted out my back stitch (which I’d never got to like previously), and I’ve added a bezel to the glued on eye, seeded on some Swarovski lochrosen (glass sequins), drops and best of all added some lentils to cover a huge space in no time at all! 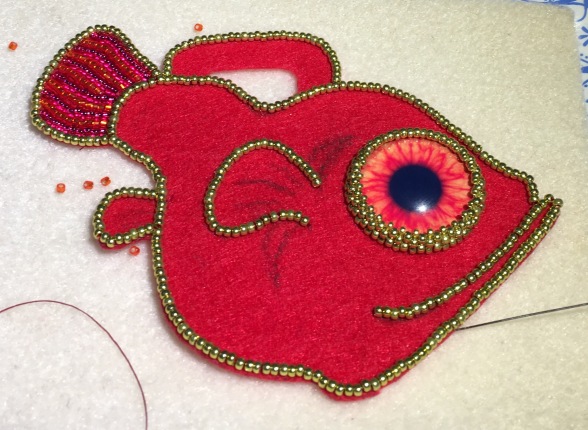 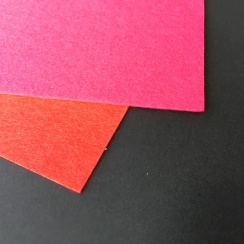 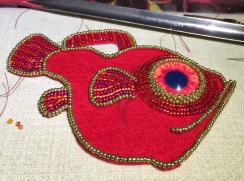 The video is well structured, with good, clear explanations of the key stitches and techniques.  There is possibly a little too much of watching Kinga do back stitch, but one can always fast forward.  It’s certainly possible to watch and bead, and then just pause when you need to catch up, which works well so long as you have a device/PC next to your beading area (in my case this consists of an iPad on the arm of the sofa).  It’s certainly been the best bead embroidery technically that I’ve done, and I think Kinga deserves full credit for that.  The next test will be to see whether I can appy this to some designs of my own.

I enjoyed making the pink and red one so much that I’ve made a second fish in pink, green and purple – this time the correct size (I scaled the first up as the eye I had was huge), and I see more of these plus some other Kinga style bead embroidery in my future……. 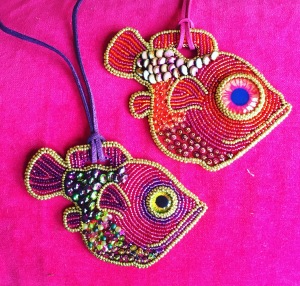 Backing – tone, contrast, compliment, whatever – I used Ultrasuede in fuchsia as it’s easy to work with and I had some, although Kinga suggests leather instead as it is more durable.

Glass eye cabochon – I used a 25mm from Wingsmith for the red/pink, and a 15mm from Kookeli for the purple/pink.  Next time I’ll use a 20mm (see Hints & Tips).

All in all not the best value, but well explained and demonstrated, and a fantastic, enjoyable project which I plan to repeat. A lot. 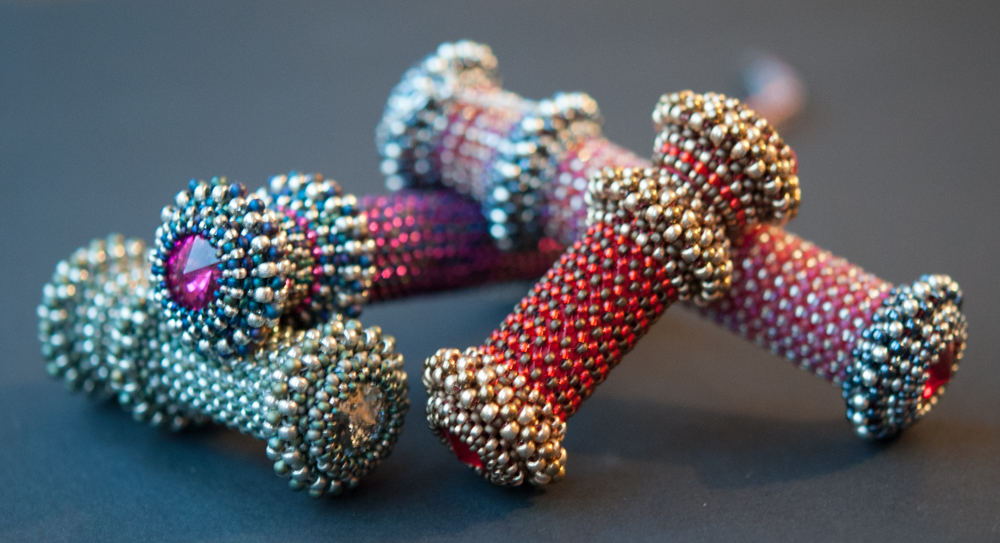 So I’ve finally finished a new tutorial.  It’s been a long time in coming – it’s the needle case from the Chatelaine I made for a Stitch n Craft challenge several years ago, and whilst my Baroque Tape Measure Surround has been available for a while now, it’s taken ages to get this one done.  That’s not because it’s tricky, or complicated, more because I’ve not until recently managed a really concentrated period of work to get it done, so I’ve ended up reworking more than I really needed to.  Anyway, I’m really happy that it’s done (and all of that rework has simplified some of the stitch paths and dealt with some tension pitfalls), so here it is:

It uses those standard wooden needle cases you can get for making peyote tubular wraps, but has a twist – it uses RAW to cover the case, so it shows through the finished piece, so must be coloured to match (or contrast), and then the ends and opening are built out to form a very solid surround for a 14mm rivoli.  The finished embellished sections with their pointed rivolis reminded me both of flying saucers, and of the Space Needle in Seattle – hence the name.  As part of my Chatelaine it formed one of the more substantial elements alongside my Baroque Tape Measure. 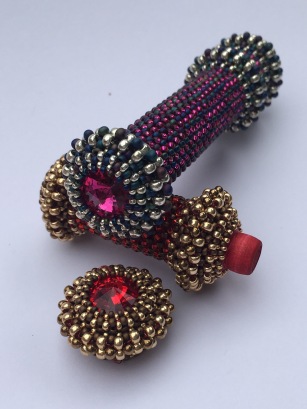 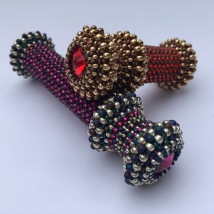 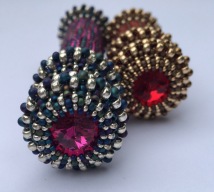 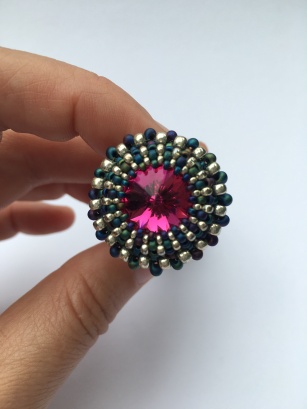 It’s really an intermediate level piece – there are full instructions for completing every step, including the basic RAW sections, and none are particularly tricky, so in theory a relative beginner could follow it, but I would say that you’d need to be confident of an even, controlled tension, and be able to handle beadwork that is fighting back a bit, so if you’re a beginner maybe work on some more basic RAW projects before you buy this one?  It’s not going anywhere anytime soon……

And I’ve been super organised, so materials packs containing all of  the beads and crystals you need, plus a pre-coloured needle case are now available for from my Etsy and Folksy shops.  You can choose between a long or a short needle case to suit the types of needles you use, and there are four colourways, available in either length.  Or all of the details of the beads used in those colourways are in the tutorials, so you should be able to recreate them without too much trouble, or even better, design your own! 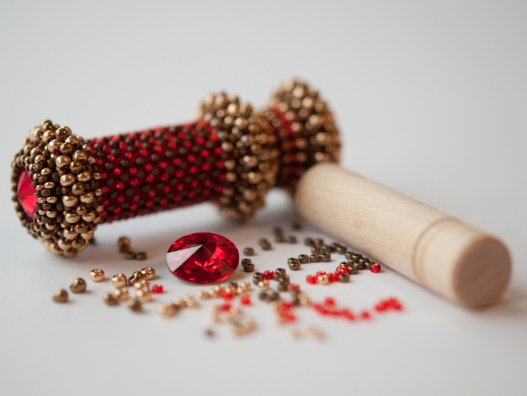 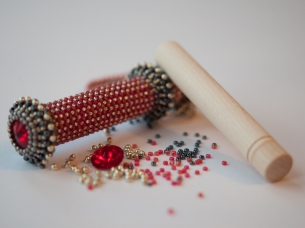 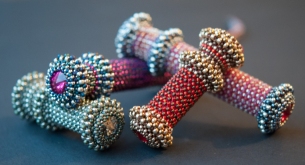 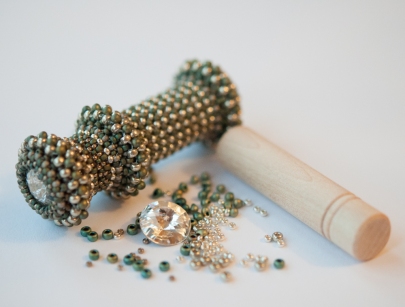 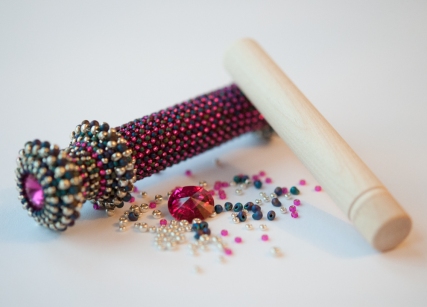