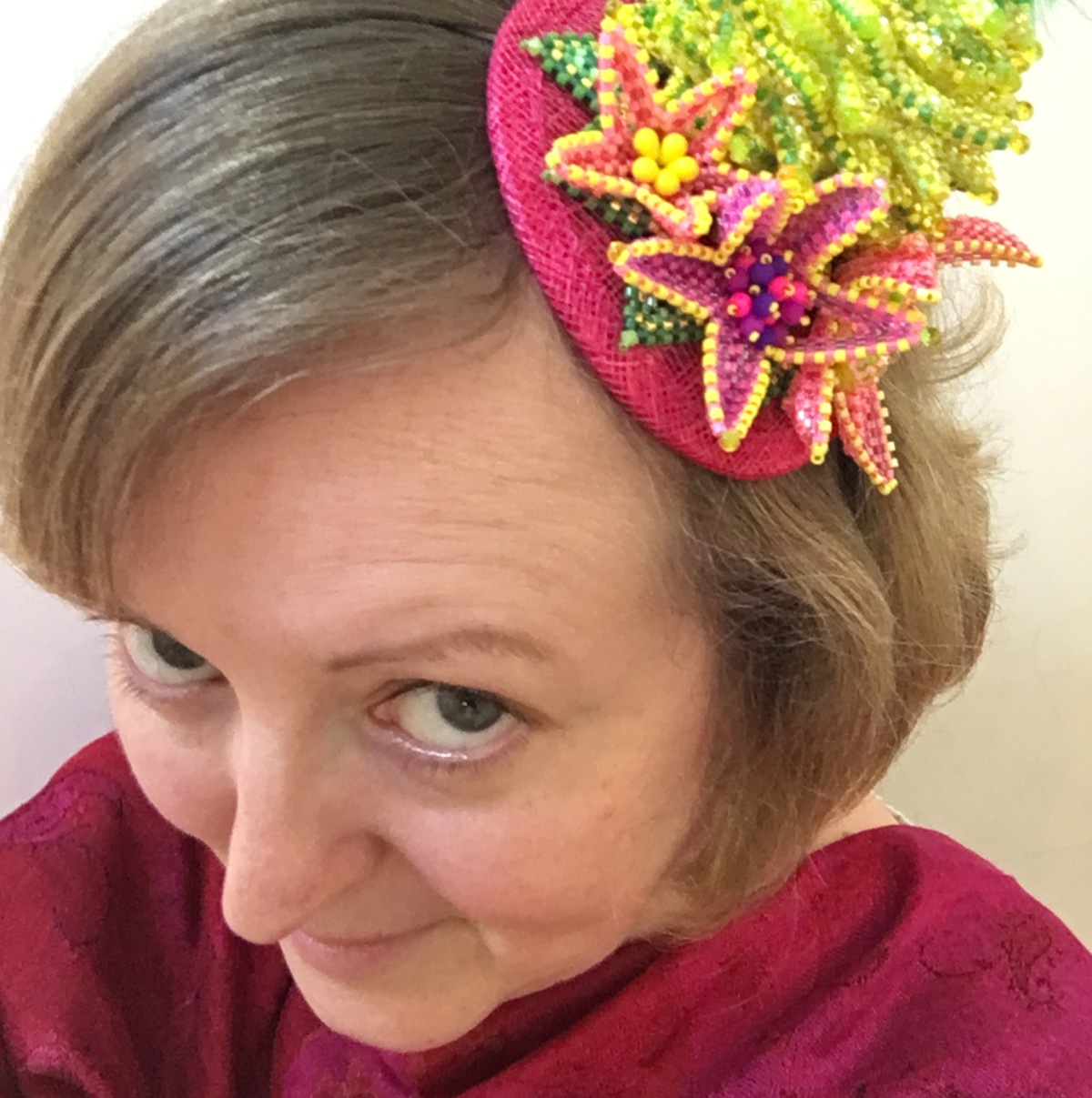 Blogging seems to have taken a back seat lately, so I find myself with a large queue of things to tell you about.  I’ll try and work through them in order, which means starting with my entry for the 2017 Beadworker’s Guild Challenge.  I’ve been a member of the Guild for quite a few years now, but have never entered the Challenge – I’ve looked at the themes each year and started thinking through ideas, but have never instantly  come up with something I wanted to get going on.  This year was different – the theme ‘Totally Tropical’ instantly said ‘pineapple’ to me, and a long slog to create a beadwoven pineapple began. 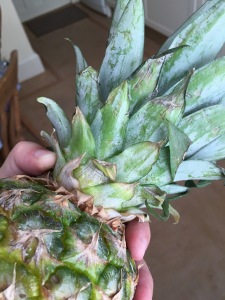 The original plan was to create a beadwoven bag, lined with silk and with a drawstring amongst the leaves on top.  It was to be made with size 10 delicas (because life is too short to make handbags out of 11s).  So I ordered all the shades of yellow and lime size 10s I could get hold of (not many UK bead retailers sell size 10 delicas), and got going on making samples.

Several months, and many samples later I still didn’t have a viable framework.  I wanted the bag to be flexible, and feel like a fabric, with the lining showing through, but all of the structures I came up with were either so flexible and light that the pointy bits of the pineapple were lost or so solid and substantial that they lost their flexibility and space.  Sadly I didn’t take many pictures, this one I clearly felt need recording for its’ sheer awfulness! 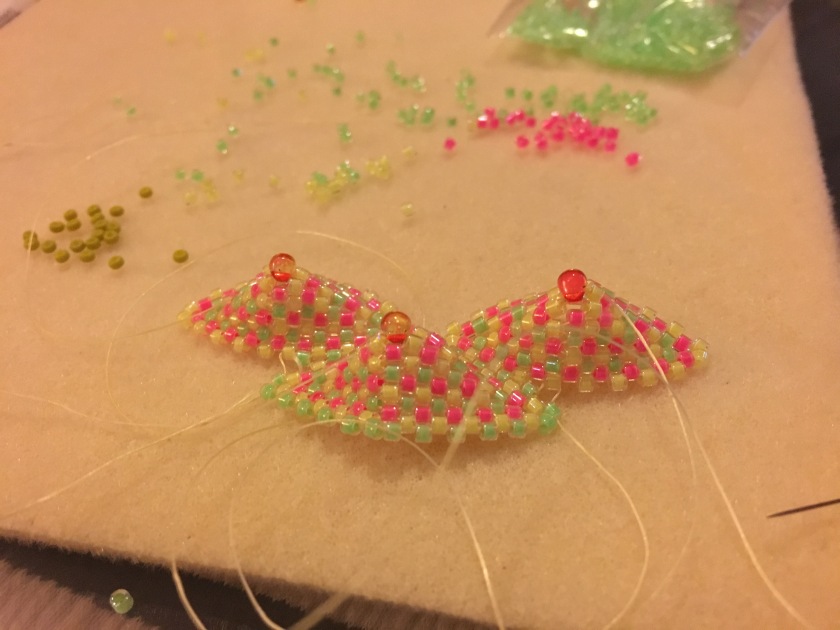 So next I turned to my usual peyote plus herringbone combo, using the techniques I’ve learnt from Jean Power and the Contemporary Geometric Beadwork team.  A solid base followed, but I couldn’t get the pineapple body going from it – however whilst working on that I started to think about using increases and decreases in a more intensive way than the simple Rick-Rack.  So I did some more samples.  I’ve learnt with the sheets of geometric work that it’s a good idea to do a few segments, turning at either end, rather than a full circle whilst you are experimenting – that way you can play without the time commitment of a full circle, and then extrapolate up to the full size required, working out the number of repeats, units etc.  It tends to save time in the long run, especially if you are struggling with the basic technical design of the piece.  So finally I ended up with a working design, and then just had to work round and round and round to make the tube for the main body. 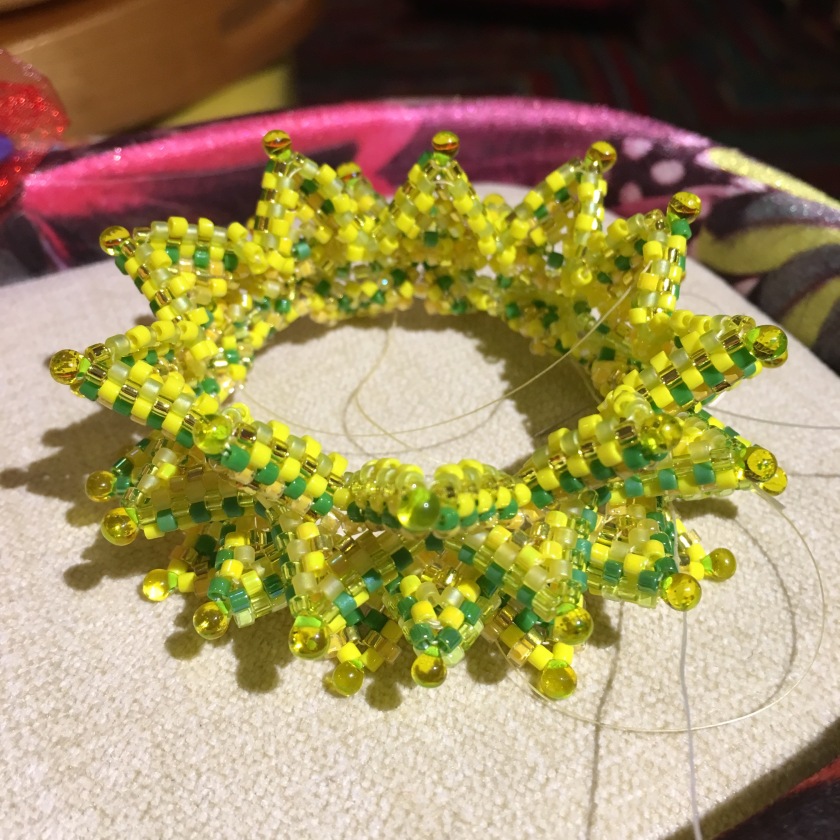 I then had to somehow decrease to make the top and bottom (thinking back I have no idea how I managed this – if I ever write this up as a pattern it will consequently simply be a bangle rather than the full fruit).  At this point I must confess I somewhat lost faith in the  design.  I had a pineapple, but it was too small to be a bag, and the decreased top meant it wouldn’t work as a box.  So somewhat disheartened I started using the technique to make a brand new cuff – with a plan to graduate in pinks at one end, and greens at the other to make  a kind of Tequila Sunrise/Pina Colada cross.  This was going swimmingly right until I checked the deadline for entries and realised I had very little time left – certainly not enough to do the amount of beading needed.  I nearly gave up at this point but the sight of all those size 10 delicas and the thought of their cost on top of a certainty that another project using those colours was unlikely to come along spurred me on – and I think desperation gave me inspiration, because all of a sudden I was ordering millinery supplies with a view to making a Carmen Miranda style hat!  Whilst I waited for those to arrive I busied myself adding leaves (eventually replaced by feathers), and making  a variety of fruit and flowers.  For the fruit I used some fluorescent pink gumdrops I’ve been hoarding, and my own ‘Great Ball of Spikes’ design, and the flowers were very leggy Rick Racks (a technique developed by Jean Power), and I used the CGB exploding rounds technique to make those more quickly. 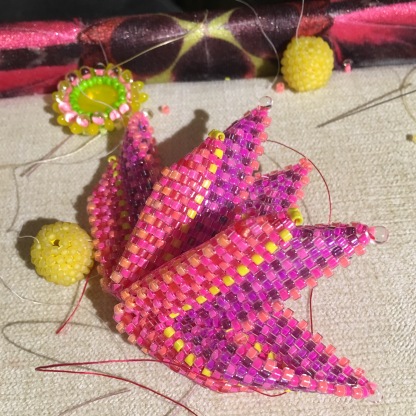 With the deadline looming, it was construction time.  As is often the case, less was more, and the fruit didn’t make it on.  The leaves I’d made for the top of the pineapple just weren’t big enough, so they were switched for some substantial feathers, and used under the flowers instead.  I also wanted to surround the whole affair with millinery net, to replicate the fabric turban used by Carmen Miranda as a base structure, but even I had to admit that was too much, and it would have made the finished piece tricky to display.  A few quick snaps, and then I packed it up carefully and sent it off the Guild.  Then I had to unlock all of the failed elements, and put the many, many beads I’d had pulled for nearly a year away.  I didn’t unpick the gumdrop beaded beads though, so I must dig them out and make something with them!

With such a difficult development, and so many experienced beaders in the same class, I wasn’t really expecting the piece to do well – entering competitions is always more about challenging myself to create something original rather than commercial, and pushing my creativity and techniques as far as I can.  This piece definitely hadn’t gone to plan, so it was a wonderful surprise to get a call from the Guild to let me know I’d won the Experienced category.  I wasn’t at the show where the results were announced, but my friends Penny Akester and Jean Power were, which was lovely, and it was fantastic to see the piece in the latest BWG  Journal.

I’ve now received my lovely prize of vouchers (to spend on beads of course).  Question is, do I buy a lovely kit from one of the super list of sellers, or do I spend it on beads for next year’s Challenge ‘Indian Summer’? 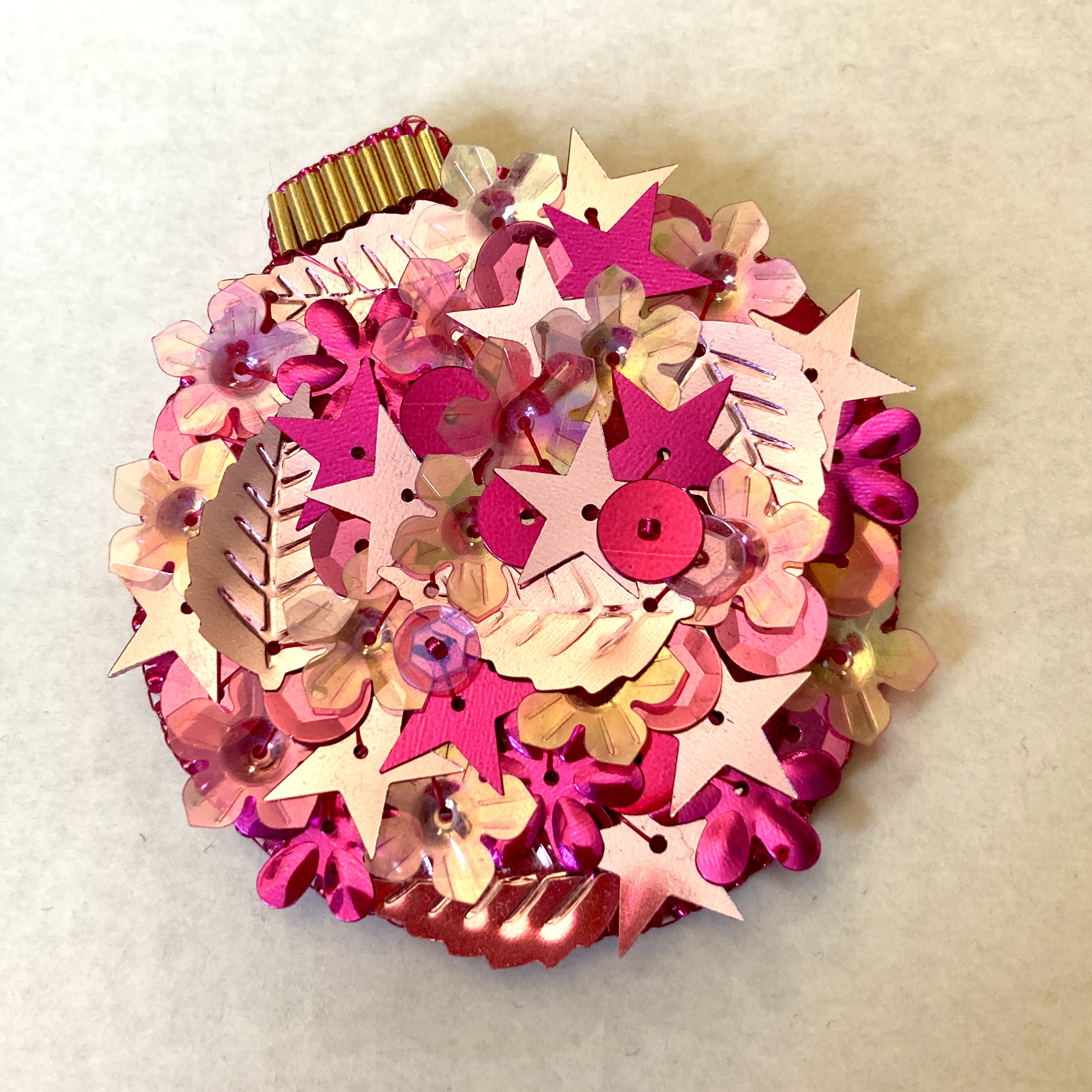 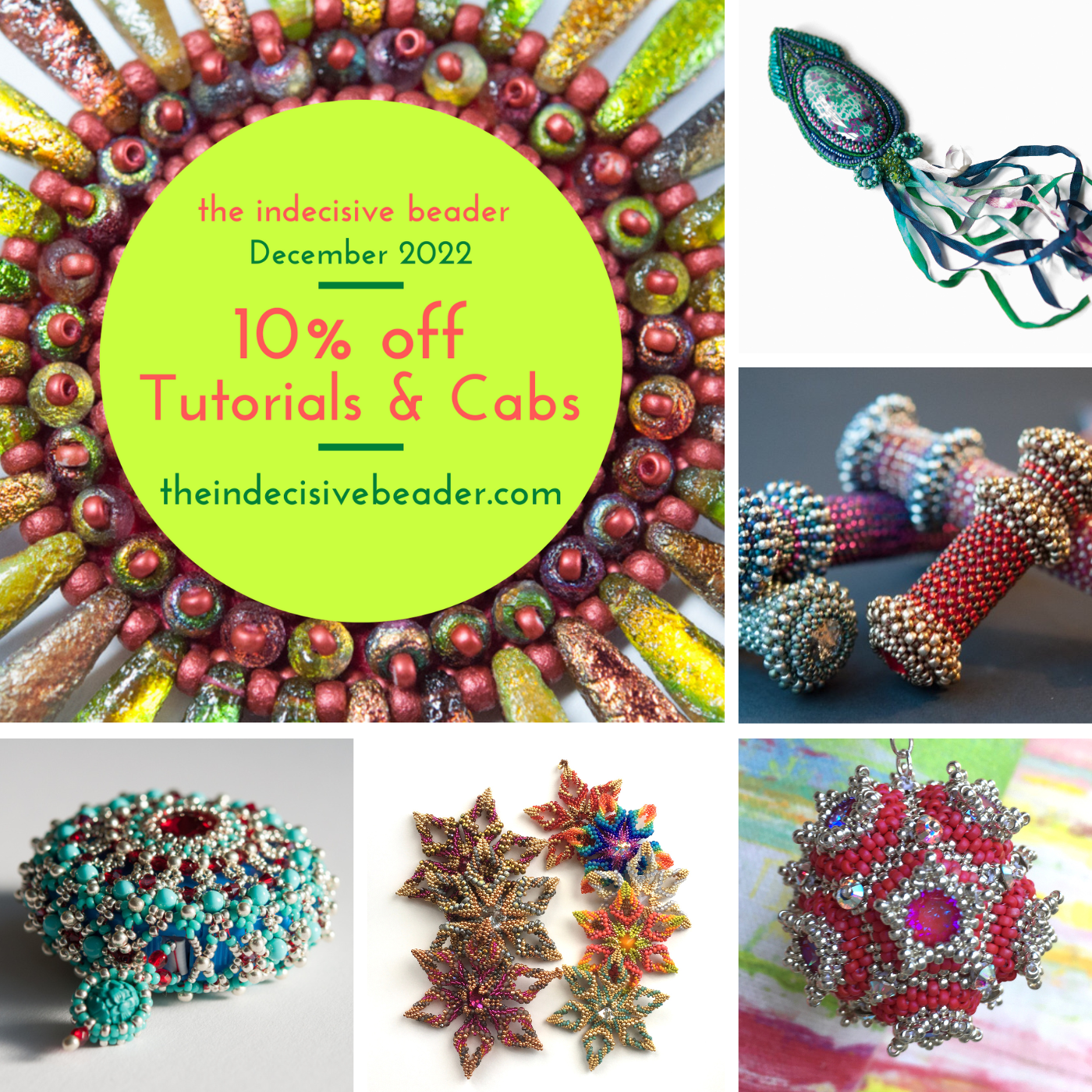