Before Christmas I beaded another project from Beadwork Evolution – ‘Stars We Are’ earrings. I wore them a couple of times (sadly dangly earrings don’t get worn much when there is a toddler in the house), but it was only when I laid them out to photograph them at the weekend that I realised I’d messed up!

Have you spotted it? To give you a clue it’s my old problem with hexagons versus pentagons…….

So I am pleased to report that this design can be adapted to form a five sided star at the base rather than six. Ideally though one should adapt both earrings, not just one! 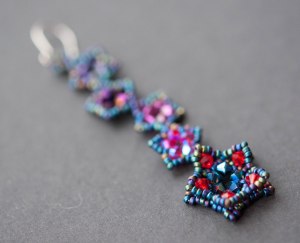 Really lovely, nice to make and fabulous to wear.  It took under an hour per earring, probably less for a second go, so I’m definitely going to make again in some other colours.  I’ve got some lovely opaque bicones which might make a less blingy version for the daytime as well.